Covid-19 Impact
Click here for an extensive analysis of the COVID-19 impact on the Analytical Standards Market .

Analytical standards are compounds of high purity that are used for calibration for a given assay. They are commonly used in a wide range of industry verticals such as environmental, petrochemical, pharmaceutical, clinical diagnostic & toxicology, forensic, food & beverage, GMO standards, cosmetics, and veterinary. Standards and reagents are the major components of analytical instrumentation that are used to achieve compliance and optimal performance. Analytical standards are categorized into two broad categories; such as organic and inorganic standards. Organic analytical standards are commonly used for conducting analytical tests for several compounds such as pesticides, petrochemicals, environment, drinking water, phthalates, pharmaceutical, clinical diagnostic, toxicology, forensic, and food & beverage, among others. 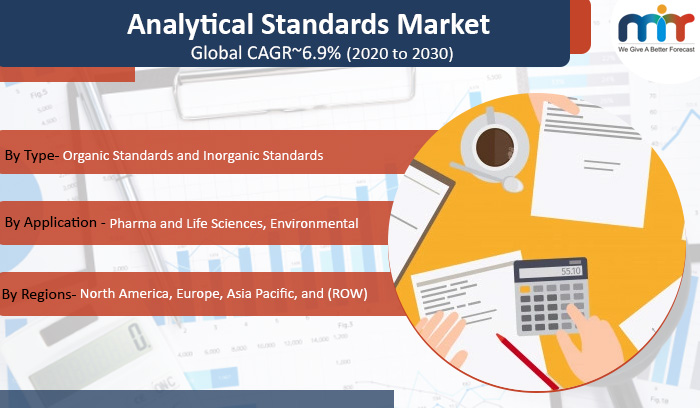 Stringent regulatory scenarios across industries, such as healthcare and food & beverages, stand to be among the key drivers for the growth of the analytical standards market. The expansion of the pharmaceutical and biotechnology industry, along with the increasing number of clinical trials across the globe, are further contributing to the market growth. The other factors contributing to the growth of the analytical standards market include increasing concerns regarding environmental pollution, government initiatives for promoting analytical testing, and the development of new research facilities, among others.

The global analytical standards market is segmented by type, technique, application, and region.

Based on type, the market is segmented, into organic standards and inorganic standards. The organic standards segment accounted for the largest market share in 2019 owing to their utilization for a wide range of applications such as pesticides, petrochemicals, environment, drinking water, biofuel, pharmaceutical, clinical diagnostic, toxicology, forensic, food & beverage, and others. Moreover, companies are increasingly engaging in business development strategies such as acquisition, agreement, and collaboration for the development of organic standards. For instance, in August 2019, LGC announced the acquisition of a majority stake in Toronto Research Chemicals (“TRC”), a manufacturer and supplier of synthetic organic biochemicals including analytical standards, natural products, APIs, impurities & metabolites, and over 18,000 stable labeled standards.

Based on the technique, the analytical standards market is segmented into chromatography, titrimetry, spectroscopy, and physical properties testing standards. In 2019, the chromatography segment accounted for the largest market share owing to the wide-scale adoption of chromatography in different industrial verticals such as pharmaceutical & life sciences, food & beverages, and environmental, among others.

Based on application, the analytical standards market is segmented into pharma and life sciences, environmental, food and beverage, forensics, petrochemicals, and veterinary. In 2019, the food and beverage segment accounted for the largest market share owing to the stringent food regulatory scenario globally for proper characterization of the properties of foods and their constituents.

The global analytical standards market is segmented into North America, Europe, Asia Pacific, and Rest of World (ROW). In 2019, North America dominated the analytical standards market, followed by Europe and the Asia Pacific. The market growth in this region is attributed, to the stringent regulatory framework for promoting analytical testing across different industrial sectors, the presence of key players, and extensive R&D activities, among others. Moreover, the launch of new products is further contributing to the market growth in this region.  For instance, in July 2020, AccuStandard has announced the addition of new items to their ISO 17034:2016 accredited product lines. It includes physical standards for ASTM methods and inorganic wet chemical standards that are accredited to ISO 17034.