Covid-19 Impact
Click here for an extensive analysis of the COVID-19 impact on the Disposable Syringes Market .

Disposable syringes are drug delivery devices that are used in injecting varying dose of drug into the body. The dosage volume is fixed depending on the mediation, thereby, allowing the exact amount of drug to be injected without the possibility of human errors. 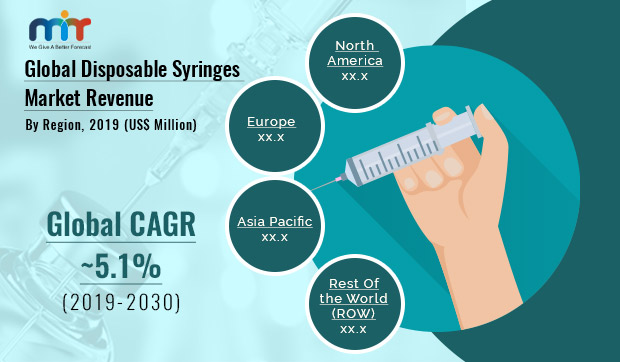 Based on application the market can be segmented into immunization injections and therapeutic injections. Therapeutic injections segment is expected to account for the largest share of the market. The growth of the segment can be attributed to factors such as increasing demand for injectable to treat several forms of ailments. High prevalence of chronic diseases, namely diabetes has been crucial in contributing to the growth of this segment.

The global Disposable syringes market can be segmented into North America, Europe, Asia Pacific, and Rest of World (ROW). North America dominated the market of disposable syringes, followed by Europe and Asia Pacific. North America will continue to dominate the global disposable syringes market in the forecast period owing to rising prevalence of diabetes and increasing adoption of biologics and availability of technology advanced drug delivery devices. However, Asia Pacific is expected to witness the highest CAGR, with the growth in this market centered at China, India, and Japan. Factors such as high number of diabetic patient India and China and growing healthcare industry is likely to boost the market in coming years.